Mr. Chuck Wendig wrote out a flash fiction challenge over at his blog, and I decided to participate.
The assignment was simple, choose a picture from this site and write a story around it.
I chose a picture at random and wrote the story, only to discover I’ve actually been to this site. I had fun writing the story and realy liked to participate and do something out of my comfort zone for once. I’ll probably will be participating more often with these flash fiction challenges!

Bamburgh dawn, picture is at Flickr, made by Alan Short. 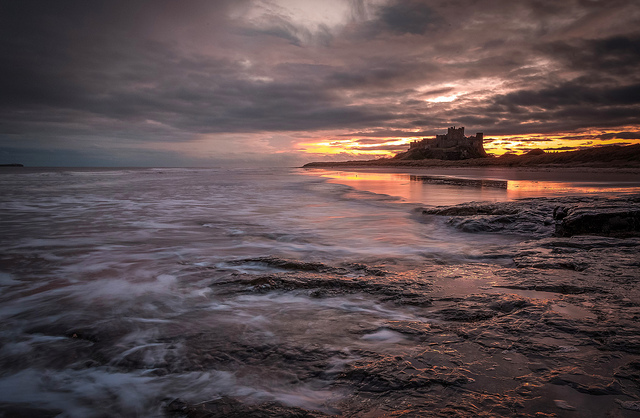 © Alan Short. I did not make this picture, nor do I own rights.

The sun rose above the castle and Eilean closed her drapes and turned to her bed. She couldn’t imagine ever having been so tired before. With a thump she hit the mattress, not even having the strength to lie down as a normal human being. Not that she ever was a normal human being, but still.

As the sun was over his highest point Eilean woke up, not feeling any better after the day’s rest. It had been that way ever since she took this job. With dread she hit the shower and slowly got dressed for another night of hunting. It seemed like such a dream job when she got hired. Living in an old castle on the coast, getting paid to keep the castle clean for the residents. Only after she signed the contract and moved into the castle, she was told that the residents were fairies. What she needed to clean? Not vacuuming the floors and dusting the surfaces, no, warding off vampires and driving out evil spirits!

After a quick breakfast she gathered her stakes, crystals and other stuff and went downstairs with a heavy tread. Eilean started in the basement, checking if a vampire had snuck in there just before dusk. She saw not one, but two coffins this time. Yay, she thought, more heavy lifting! She dropped her stuff and grabbed one of the handles of the first coffin.

With slight ease she dragged it up the stairs and put it down in the living room just in front of the giant windows. Probably a young one, judging by his weight. Eilean did the same with the other coffin and put it next to the first. She opened up the drapes, enjoyed the sunlight for a minute and then turned towards the coffins. She grabbed both lids and threw them open while also stepping back real quick. She hid behind the big sofa as she watched both vampires turn to ashes in the sunlight. They never knew what happened, as they never had the chance to even come out of their place of hibernation.

With a sigh she grabbed the vacuum, got rid of all the dust and chopped the coffins up for firewood. Job one done, only to survive the rest of the day and night. After she was done checking the rest of the house for unwanted visible guests she lunched, alone, on the far end of the big table. She had given up to meet her employers, after months of asking the only other human in

the building, the butler. He always acted vague when they would bump into each other, as if he had something to hide. Always giving a strange reason as to why she couldn’t meet the fairies that night. At last Eilean gave up and that improved their relationship a little bit. It must be a big family, judging by the table she ate her lunch at. Maybe it was better she didn’t know.

Darkness set over the castle and Eilean began the part she hated most. Sitting still in the living room and listening to sounds, judging if it were ghosts, or just the house squeaking. By now she knew which sounds were normal, and which she had to investigate. Most nights she sat there for hours, listening and trying to stay awake. Luckily it didn’t take that long before she heard a sound that wasn’t the house settling in the cold air.

The sound let her to the upstairs library, a favorite room for Eilean. Bookcases up towards the ceiling, and all sorts of books and reading materials. It was the only room other than her bedroom she visited often. She put down the crystals in a circle and began her chant to make the ghost visible. As it started to appear her heart sank into her shoes, it was a poltergeist. This was going to be a long night. The poltergeist started to throw books at her as she looked up the spell for driving out this kind of ghost.

While she was gathering the supplies she needed for the spell, the ghost was still throwing stuff at her. She had good senses and stayed clear of all the things thrown at her. Maybe it was fun for him, but she had to clean up the mess afterwards. It took her over an hour to gather everything and by the time she started she was already exhausted. The sun was coming up when she finally got rid of the poltergeist. It had been a sturdy one, she had to repeat the spell numerous times before he gave up. She heard another ghost in the house but he had to wait till the next night, Eilean had to clean up the library first. Picking up books as she went around the room, putting them back in their own slots in the bookcases. By the time she was done it was midmorning and she took off to her bedroom. No dinner tonight, she grabbed an apple on the way. Not even having the strength to close the drapes she hit the bed with a thump, as she was wondering if she ever would feel normal again.